Morpheus, The Matrix and The 12 Steps

In early recovery I was given a prayer by my first sponsor and told to say it on a daily basis. That prayer was to ask for ‘an open mind and a new experience’. In one of our early meetings where we sat reading the Big Book at Cafe La Flecha in Calle Juan Bravo, he told me that the journey in recovery was not dissimilar to that undertaken by Neo in The Matrix (1999) . I describe 2006 as Year Zero, finally understanding what it meant to be ‘born again’. In this article I have chosen some quotes from That Matrix that I believe match up well with certain sections of the Big Book of Alcoholics Anonymous.

This is your last chance. After this, there is no turning back. You take the blue pill – the story ends, you wake up in your bed and believe whatever you want to believe. You take the red pill – you stay in Wonderland and I show you how deep the rabbit-hole goes.

1. We were in a position where life was becoming impossible, and if we had passed into the region from which there is no return through human aid, we had but two alternatives: One was to go on to the bitter end, blotting out the consciousness of our intolerable situation as best we could; and the other, to accept spiritual help.

2. Everybody nowadays, believes in scores of assumptions for which there is good evidence, but no perfect visual proof. And does not science demonstrate that visual proof is the weakest proof? It is being constantly revealed, as mankind studies the material world, that outward appearances are not inward reality at all.  To illustrate:

The prosaic steel girder is a mass of electrons whirling around each other at incredible speed. These tiny bodies are governed by precise laws, and these laws hold true throughout the material world.

Neo, sooner or later you’re going to realize just as I did that there’s a difference between knowing the path and walking the path.

3. The spiritual life is not a theory. We have to live it.

You have to let it all go, Neo. Fear, doubt, and disbelief. Free your mind. 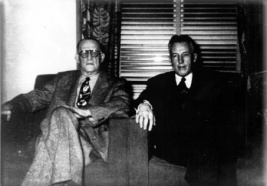 4. We had to fearlessly face the proposition that either God is everything or else He is nothing.

I know *exactly* what you mean. Let me tell you why you’re here. You’re here because you know something. What you know you can’t explain, but you feel it. You’ve felt it your entire life, that there’s something wrong with the world. You don’t know what it is, but it’s there, like a splinter in your mind, driving you mad. It is this feeling that has brought you to me. Do you know what I’m talking about?

5. We were having trouble with personal relationships, we couldn’t control our emotional natures, we were a prey to misery and depression, we couldn’t make a living, we had a feeling of uselessness, we were full of fear, we were unhappy, we couldn’t seem to be of real help to other people.

That you are a slave, Neo. Like everyone else you were born into bondage. Into a prison that you cannot taste or see or touch. A prison for your mind.

6. Relieve me of the bondage of self, that I may better do Thy will.

Have you ever had a dream, Neo, that you were so sure was real? What if you were unable to wake from that dream? How would you know the difference between the dream world and the real world?

7. To them, their alcoholic life seems the only normal one.

Welcome to the desert of the real.

8. They are restless, irritable and discontented, unless they can again experience the sense of ease and comfort which comes at once by taking a few drinks—drinks which they see others taking with impunity.

9. Many of us exclaimed, “What an order! I can’t go through with it.

10. Almost none of us liked the self-searching, the leveling of our pride, the confession of shortcomings which the process requires for its successful consummation. But we saw that it really worked in others, and we had come to believe in the hopelessness and futility of life as we had been living it. When, therefore, we were approached by those in whom the problem had been solved, there was nothing left for us but to pick up the simple kit of spiritual tools laid at our feet. We have found much of heaven and we have been rocketed into a fourth dimension of existence of which we had not even dreamed.

We’ve survived by hiding from them, by running from them. But they are the gatekeepers. They are guarding all the doors, they are holding all the keys. Which means that sooner or later, someone is going to have to fight them.

11. Resentment is the “number one” offender. It destroys more alcoholics than anything else. From it stem all forms of spiritual disease, for we have been not only mentally and physically ill, we have been spiritually sick.

You’ve been living in a dream world, Neo.

12. We found the Great Reality deep down within us. In the last analysis it is only there that He may be found.

The first step to waking up is to be honest, to admit to yourself that you don’t like it –  Anthony De Mello

Leave a Reply to Working With Others: The 5&5 – Julian Conor Reid Cancel reply