* Originally published in January 2018 on julianconorreid.com, this article was revised and expanded for publication by Getintothis in May 2020.

In the early 1990s I attended Merchant Taylors’ School for Boys in Crosby. One Saturday afternoon, after a rugby match, my friend and teammate Chris introduced me to his little brother Matt who had been watching our game from the touchline. Then still at primary school, two years later Matt would join us at Merchants where he became friends with a boy in his year called Charlie Turner. After leaving school I would often bump into ‘little’ Matt and Charlie at grassroots gigs in Liverpool. I was heavily involved in the Liverpool music scene and would evangelise to Matt about bands such as Proper, Gluebound and Deep End. 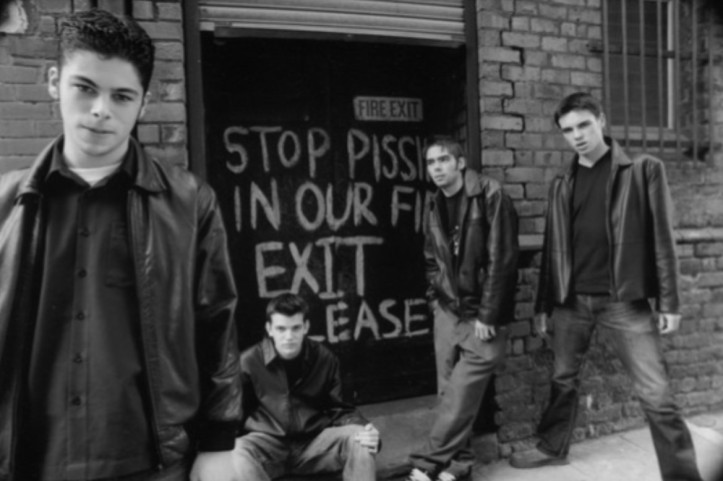 Matt and Charlie formed a punk-pop band called Resthome whilst still in their very early teens. I went along to see them play at The Pit in Duke Street and it was immediately obvious that Matt had the potential to be an excellent frontman. After various changes in personnel, Charlie and Matt drafted in Ben Gordon on guitar and Bryan Johnson on drums and Resthome became Pinhole. Their young manager, Yorkshireman Simon ‘Shifty’ Ryder, operating with extremely limited resources, did an excellent job in providing the band with opportunities and raising their profile nationwide. Shifty met Thrill City President John Robb at a Queens of the Stoneage gig and he (Robb) expressed his admiration for Pinhole and agreed to finance, produce and release their debut EP.

Recording took place in the Andy McClusky (OMD) owned ‘Motor Museum’ (formerly the ‘Pink Museum’) where Oasis had written and recorded their debut single ‘Supersonic’. The studio was located in suburban south Liverpool, close to where the band all lived. John Robb’s production input coupled with Pat O’Shaughnessy’s engineering skills helped to produce a raw, energetic and melodic recording.

The band released the ‘Breaking Hearts & Windows EP’ in 2001. It consisted of four tracks, of which my personal favourite is ‘Is This The End’, an urgent melancholy rock track. ‘City Living’ was also an enjoyable punk-pop tune, reminiscent of The Jam and The Undertones.

A UK tour was scheduled to support the release of the EP, and Matt and Shifty asked if I would tour manage the band. I had spent several years working for Hug Management at 51-55 Highfield Street and had several UK tours under my belt with artists from the Hug roster, including Space. I was also usually the de facto tour manager/guitar tech whenever Hug’s unsigned bands played shows in Liverpool and further afield. Pinhole could offer no salary, only PDs of a tenner a day – but because of my friendship with Matt and the fact that the rest of the lads in the band were extremely likeable, I agreed to captain the Good Ship Pinhole on its maiden voyage of the UK.

I was Pinhole’s tour manager for two extremely messy UK tours and numerous one-off shows. The band made it clear that they considered my most important duty as tour manager to be making sure that we were given the ‘bottle of voddy’ that had (sometimes) been promised as part of the rider. Copious amounts of ‘dirty rocky’ were consumed and everybody on the tour came close to losing their minds, with the possible exceptions of Jason ‘Jay Dog’ Fearnley (our rock-steady driver and drum tech) and Bryan ‘BJ’ Johnson (the band’s level-headed drummer). We also took a video camera on tour and filmed hours of footage, damning documentation of our descent into weed induced psychosis. Sadly (or perhaps fortuitously) the camcorder tapes were lost and the tour footage never saw the light of day. We would generally stay in Travelodges, usually in the same room, although there was one memorable night (featuring guest appearances by Captain Morgan, American college girls, a Psychotic Scot and the Metropolitan Police Service) when we stayed at the legendary Columbia Hotel in London.

Other tour memories include:

The band had a friend in Lytham St Anne’s who had unbroken access to a plentiful supply of mind and mood-altering substances. The aforementioned friend had asked if Pinhole would be available to perform at his 50th birthday party and the band were happy to oblige. We rocked up in our red van to the Royal British Legion in Lytham St Anne’s, the band performed and then the party moved en masse to an old house somewhere else in town. The madness that ensued was something between Scarface, Heart of Darkness and This is England. At 7AM we were out in the garden, chatting nonsense to an assortment of gangsters and hardcases. It took me three days to recover physically and over a decade to recover mentally. Often after a night of hard partying I would wake up and regret the events of the night before: after Lytham St Anne’s I woke up and regretted my entire life. A year later I was chatting with Matt and I mentioned the party in Lytham St Anne’s. A traumatised look flashed across Matt’s face and he whispered: ‘Lytham St Anne’s is an expletive as far as I’m concerned, Jules. Please don’t mention it again.’

A far more uplifting moment came courtesy of the late John Peel, after a show in Shifty’s hometown of Sheffield. Having finished their set, the band dashed from the stage to the van and tuned into Radio One. Huddled round the speaker with baited breath, we listened anxiously to Peel’s affable, monotone drawl. The band, barely off stage and drenched in sweat with steam rising off their backs, erupted as Peel announced: “And up next… is a band from Liverpool called ‘Pinhole’. They’re currently on tour (reads out the tour dates) and in fact tonight they are in Sheffield. This is off their Breaking Hearts & Windows EP” and then played ‘City Living’, the EP’s lead track. We all went ballistic, cheering and whooping, laughing and smiling, hugging and kissing. We drove back through Snake Pass, stoned and paranoid that the ghosts of vagrants allegedly killed by Ian Brady would haunt us if we stopped to take a piss. The soundtrack to ‘War Of The Worlds’ blasted out at full volume as we bellowed in unison: “The chances of anything coming from Mars is a million to one he said!”

(Random Memory: A few months later, after the tour had ended, I was with Matt at Hannah’s Bar on Hardman Street when Wayne Rooney scored his last-minute winner against Arsenal in. We were both Evertonians and celebrated wildly. A few months after that we were hanging out at The Picket with Pete Wylie who astutely observed: ‘That commentator (Clive Tyldesley) really got it right with that ‘Remember the name!’ comment’.)

I had the privilege of travelling with the band to BBC Maida Vale Studios London for their Peel Session which was broadcast on 27 January 2002. The Peel Session featured four songs: ‘Addicted to You’, ‘City Living’, ‘Is This The End?’ and a cover of The Clash song ‘I’m So Bored Of The USA’. It is a fascinating document, showcasing a young punk pop band developing their craft.

In my opinion, Pinhole’s finest moment remains ‘Morning Rain’, which was a double A side with ‘So Over You’. I would go so far as to say that ‘Morning Rain’ is better than anything that The Dead 60s would later release, with the possible exception of ‘Stand Up’. I was surprised when ‘So Over You’ received the lion’s share of attention, featuring in John Peel’s Festive Fifty in 2002.

Pinhole’s gig-of-a-lifetime came on 15th July 2002 when they were hand-picked by Green Day to support them at Newcastle Arena. Matt told Debbie Johnson in The Liverpool Echo:

It was great. It came about because they’d heard of us, and because Steve Lamacq recommended us to them when they were looking for a support. It was really great of them. We were the only band supporting them and they knocked back much bigger bands than us. They listened to our music from the website and liked it. They were really nice guys, and the singer, who has his own record label back in the States, is interested in putting some of our stuff out over there. It was quite an experience.

But things began to stall. The EP, second single and two UK tours had not generated the interest that we had all hoped it would. The band were bored of the punk pop Green Day pastiche and were becoming increasingly interested in Ska, Reggae and Dub. Stuck at an impasse, Charlie picked up the phone and called Alan Wills, the founder of Deltasonic Records… 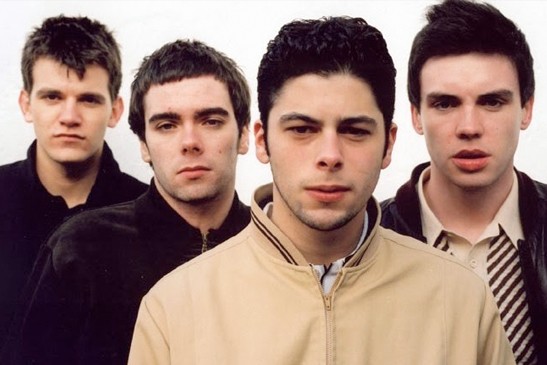 Pinhole changed their name, their sound continued to evolve, and they went on to achieve success as The Dead 60s touring extensively around the world and releasing two albums. Their short, sharp burst of success included two appearances on Top of The Pops and festival slots at Glastonbury and Lollapalooza. Tours with Morrissey, Kasabian and their label mates The Coral helped to establish the band and their eponymous debut album charted at number 23 in the UK Top 40 – it would eventually sell over 100,000 copies. The Dead 60s had 5 UK Top 40 singles but ‘Stand Up’, the (brilliant) lead single from their second album failed to crack the Top 50, charting at number 54.

They remain best known for their track Riot Radio which currently has over a million plays on Spotify. The Dead 60s disbanded in 2008.

* Originally published in January 2018 on julianconorreid.com, this article was revised and expanded for publication by Getintothis in May 2020.