Anybody who regularly attended gigs in Liverpool in the mid-90s will be familiar with the name Jubjub. They worked hard to build a fanbase and promoted themselves extremely well. They were managed by singer Joel Bird’s father John, who I would often see in 51-55 Highfield Street when he came to visit Mark Cowley. The band also included Jamie Bleasedale, son of legendary Liverpool playwright Alan. It was this connection that secured the band prestigious support slots with Elvis Costello. 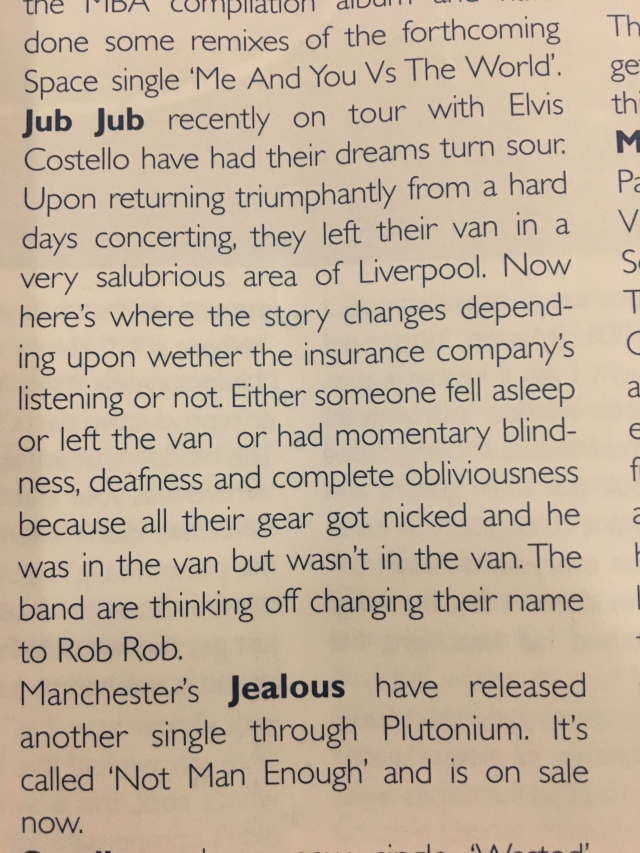 Joel stood-in for Jamie Murphy on Space’s 1996 US Tour when the guitarist was absent and suffering from nervous exhaustion. Joel is also present on Space’s Top of the Pops performance of Dark Clouds.

Jubjub used to pack out their Liverpool gigs but their popularity was more or less confined to their home state. They released the Big Mouth EP on Plastic Records in 1998. The lead track reminded me of Space which was unsurprising given the time that Joel had spent rehearsing and performing with the band. The standout track on the EP was ‘Give it All Away’ with its rousing refrain: ‘Today I lost myself in your arms’. ‘Give it All Away’ is a brilliant pop song. 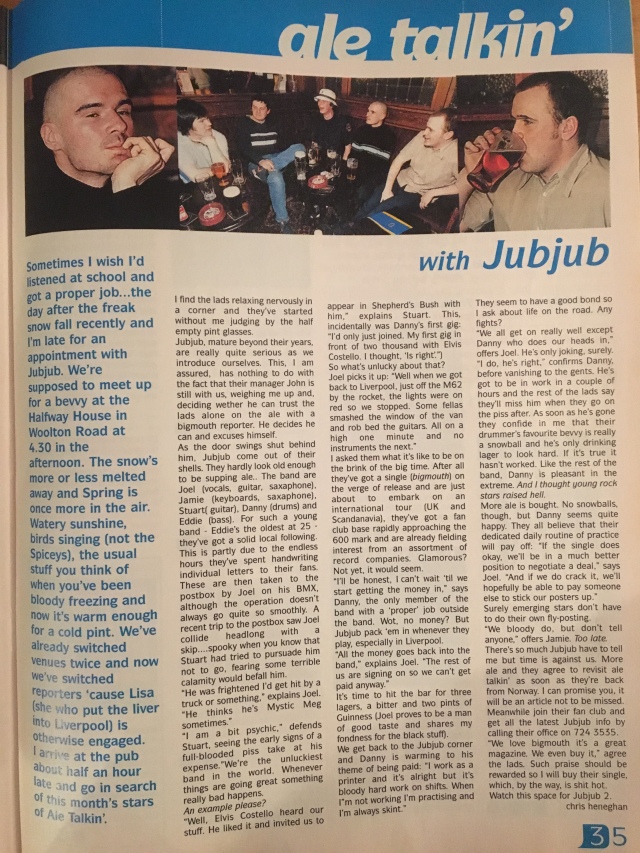 Jubjub later changed their name to Eto but split up a few years afterwards.

Eto were formed in 1999 by two founder members of the successful Liverpool based band Jubjub – Joel and Jay. The dance revolution of the 90s – spearheaded by Liverpool’s ‘Cream’ nightclub for which Jay’s cousin Paul Bleasdale was a founder DJ – inspired a change to their earlier music. Joel was fueled with ideas and set the concept for the band as Jay searched the universe for the intergalactic samples and drum loops that now form the basis to the sound of eto. A solid bass was needed to ground the spacey synths that were taking eto to new levels – enter Matt and the grooves to guide the way. A background in percussion work for dance clubs around the UK made Andy the ideal candidate to bring funky fills to the loony loops. The final piece of the jigsaw was added in May 2002. Jamie came with his big beats and took his place at the drums to complete this formidable line-up.

I am influenced mostly by folk songwritters and soundtrack composers. I am from Liverpool but I now live in London, England. I have in the past toured the UK and USA with my own bands Jubjub and Eto and also with artists such as Elvis Costello and Catatonia, I have also played guitar and toured with Space. I have written soundtracks for films such as Shifty and worked on TV films with writer and screenplay Alan Bleasdale. When I moved from Liverpool to London, I left music to work as an artist and a carpenter, but I missed music alot. So I return with an album under the name Joel Bird called ‘Where the Crows Sleep’. I recorded the album through a changing Autumn in a converted shed that overlooks allotments, I have tried to tell my stories about love and death and hopefully some of the atmosphere of the place has been preserved in the music. I walk home through a graveyard most days and I often whisper secret goodbyes. I am not sure about spirits, but it is nice to think of them living in crows. When people die only love remains, people try to forget the rest.